Yesterday night, I received an award for my contributions to the media industry. Normally awards for marketing are given out for campaign work for clients but the Media Week 30 under 30 awards are given out to those who are deemed to be the most talented people under 30 working in the media industry. This was the first year I could enter and it would be my last as well as I only just met the age criteria this time around.
In my short agency life, I have achieved a great deal and done a lot of really cool stuff which I am very proud of. I am especially lucky to have worked with so many great people over that time who either gave me the opportunities to do well or helped shape my social media career. Having come from an investment banking background and then an acting career, my life could have been very different if it wasn’t for the foresight of Jon Wade (now Head of digital practice, Asia Pacific @ Weber Shandwick) and Julian Ormerod (now Managing director, Europe @ Blast Radius) who gave me a shot at working in a top London agency at Wunderman (WPP). 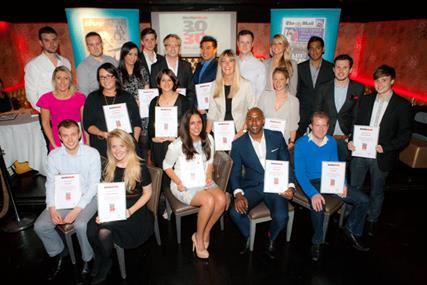 This year the submissions were video based supported by a written statement. If you got 3D glasses then you can watch my winning submission here
I also did an interview with Mediaweek which can be found here once it’s up on Media Week’s website.
This year the competition was fierce with many great entrants not making the final 30. Having met many of these smart people, I feel honoured to have been considered for this accolade. MEC had the best representation of the night scooping up what looked like every other award. The guys from The Mail on Sunday who sponsored the event (it was their 30th birthday) and Marketing Week were great hosts. I found myself staying out late with those guys making it a very memorable night that I will cherish forever.
Posted in General Blog and tagged 30 under 30, Featured, media industry, media week, mediaweek