A couple of days ago I went back to Cad & the Dandy for my basted fitting session. I turned up about 10 minutes for my appointment which was made over the phone with Ian, the guy in my previous Made to measure suit post. There was another guy around who hung around. I wasn’t sure whether he worked there or if he was another customer. Ian welcomed me with a handshake and noted that he had read my blog post. He put away the name dropping on this visit which was a plus for me. He asked me how business was and who I was working with. I moved on quickly to get started with this section of my suit fitting. 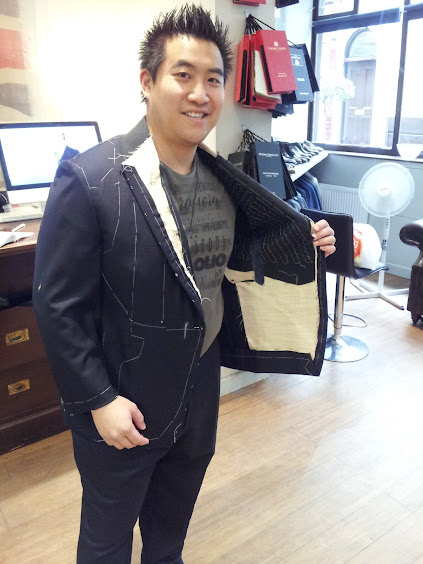 I tried on my basted suit for size, the band at the top of the trousers were a little snug and there was a little too much slack in the arms but on the whole the fit was pretty good. Ian talked through the benefits of the cross stitching on the full canvass over having it half basted by a machine with a straight pattern. There was excess slack in the trousers, which having previously busted through several pairs of trousers due to a combination of large thighs and multiple phones plus huge wallet was a positive thing for me. There were no pockets put in yet though so I was imagining having things there by pulling out the trousers a little.
Ian did offer his 10 cents on a couple of things which were to bring up the trouser leg a little so that I had a better looking break at the front of the shoe. Something I agreed with to alter for the next fitting. The other suggestion was for me to have a smaller wallet. I have been through several small wallets over the years but now I am ultra content with my ultra fat Offermann beast which makes my personal finances portable. 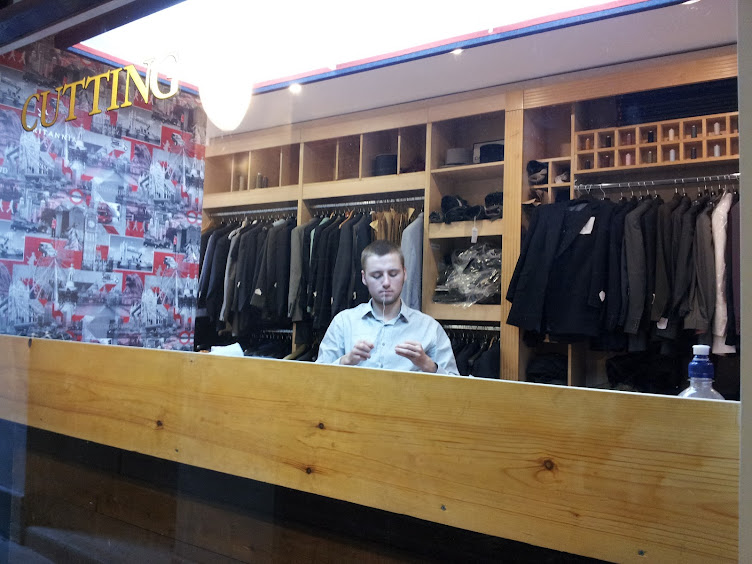 One of the tailors at Cad & the Dandy

The session lasted about half an hour and was a decent experience. Ian was happy to take a couple of snaps of me and admitted that he was no Bailey! Having seen the great fit so far, I’m really looking forward to the next alteration stage which should be in 4-5 weeks. The other guy did introduce himself at the end, but I forgot his name. He’s one of the guys on the their website.
Yesterday, I picked up my Mark Marengo suit from Savile Row having chased them for a receipt and also how much longer they were going to take to alter the suit via email for the last couple of weeks. It turns out that the second pair of trousers will be made, but I was told by Neil Marengo (Mark’s brother) that I would have to wait until the Italian’s were back at work after their traditional summer break.
I made my way down to the Mark Marengo store on Savile Row to pick up my suit. I was very excited and putting on the suit, I became less excited as I noticed the stitching at the alteration points were not exactly the highest quality I’ve ever seen. A lot of the thread was loose or there were plenty of excess at points including the trouser pockets. The bottom of the suit was a good length but again the altered stitching was not straight and ended at random points. Maybe I’m being picky but I did pay £570 for this suit from Savile Row. I had expected better as I have received better care and attention elsewhere on the Row for alterations. The trousers are still quite tight around the front fly area as it is a straight flat cut rather than pleated. This will definitely crease quickly with a little wearing in, especially with my 2 mobile phones and my Offermann wallet!

Neil is a nice guy and he is very easy to get on with. He didn’t need to keep the suit to make the second pair of trousers which worried me a little. I hope he comes through on the second pair of trousers as I don’t see much longevity in this suit at the moment. From afar I think the suit looks great, the service in the store is great but I just wish that the blaze alteration stitching was up to the same kind of standard and that I would get my blasted receipt!
This project is really starting to take shape with Reiss the likely next suit destination as my suit comes back from the personal tailoring block in a couple of weeks.
Read my original post launching the suit project here
Posted in Product Reviews, Style and tagged alteration, basted fitting, cad & the dandy, full canvass, mark marengo, savile row, suit