Jesse gave me a call last week to tell me that my suit was arriving this week so I booked in to see him for an alterations fitting. Walking in early to the Reiss store in New Change shopping mall, I found Jesse ready to greet me with my suit. The first thing I noticed in the changing rooms was that the block machine stitching was really good. There was a little fraying in the lining and there were some loose ends but around all of the wool the seams looked neat or were completely hidden. 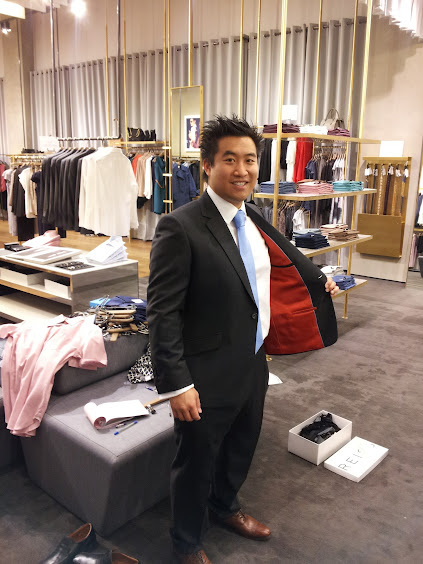 Around the back of the jacket there was a little bagginess that couldn’t really be adjusted out by taking anything in because the shape of the jacket would have gone. The arms were quite skinny around the forearms but undoing the working cuffs made the double-cuffed shirt stand out a little. At the fitting, only two of the button holes had been cut open with the back two holes completely stitched up. That was a little disappointing presentation wise. The trousers also required flaring out a little at the shoe end as the diameter was too skinny to fit around my shoes. I did try on another pair of shoes while in the store to make sure it wasn’t just my shoes being abnormally big at the heel and indeed it was not the case. Jesse initially suggested that I shorten the trousers so that I didn’t have a triple crease break at the bottom of the trousers which would have made me look even shorter than I am. No thanks! Jesse also displayed surprise when I told him that suits shouldn’t be dry cleaned all the time as he does with his suits. What a major point of ignorance for a fully trained Personal tailoring Reiss guru.
My alterations should be finished by the end of the week and if you read my initial blog post about this whole project, you can see that there is something missing from this post. When I asked Jesse where my second pair of trousers were, he called up HQ to find out that they were on the next batch out to the store as he couldn’t find them in the stockroom. About an hour later, Jesse phoned me up to inform me that they hadn’t even ordered them yet! I was really disappointed with this cock up as I will now have to revisit again in 2 weeks to fit, try on and alter those trousers too.
The Reiss experience was mixed, the actual garment felt high in quality. The wool and lining were really nice and the fit was pretty good off the Personal tailoring block. My name is printed in the label in the inside pocket although it still shows the original block details alongside it. What really lets down the Reiss experience is the distinct lack of knowledge from staff about suits and also their carelessness when it comes to simple things like following a check sheet. Where I was offered a hand made tie for a ripped pair of trousers at Mark Marengo, I am pretty sure that there will be no compensation of any kind from Reiss who seem a little too naïve to care.
UPDATE – Another massive Reiss cock up
I got a call this morning a couple of days after I wrote the above and was told that my trousers were ready and that the second pair of trousers would now take an extra 4 weeks. When I pushed for compensation, Jesse offered me a measly 10% discount on the 2nd pair of trousers. It’s measly because that still makes the trousers more than £20 more expensive than any other tailor on my suit reviews. It also doesn’t make up for the £15 I spend to travel to the store each time. When I turned up today, I noticed that the foot of the trousers were not neatly stitched at all. The ironed hem was also protruding from the wool which had a weird arc shape to it. The break in the trousers when I tried them on was still as bad as before. It was so disappointing and it led to Jesse simply apologising non stop to me and again insisting that I hould get the trousers shortened. I stopped him there again and showed him the inside of the trousers which clearly had not been taken out as a flare as it should have been. 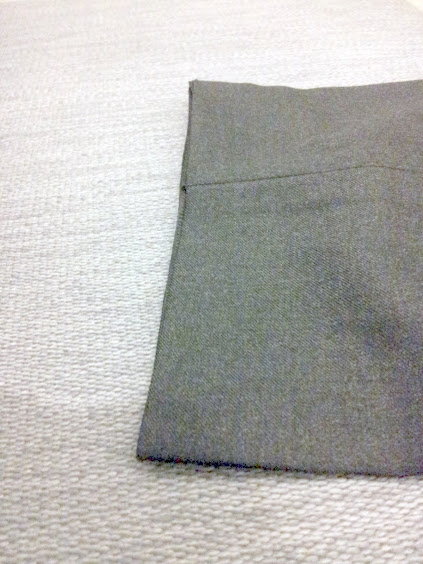 The poor alteration from Reiss on the Personal tailoring service

The alterations were really poor and little care and attention had been taken in matching the quality of the stitching from the factory block. I was so massively disappointed with Reiss that I decided to make a formal complaint on their website only to find that their website was down! Naturally I then made my point on Twitter and on their Facebook page. Their Facebook page had no user update field to populate so I placed my grievance in their recommendation box which looks pretty non moderated. I did get a bog standard reply on Twitter to go to their website to complain which is what I am going to do right now after I publish this post. Wish me luck – it can only go up from here!
Read my original post launching the suit project here
Posted in Product Reviews, Style and tagged made to measure, personal tailoring, reiss